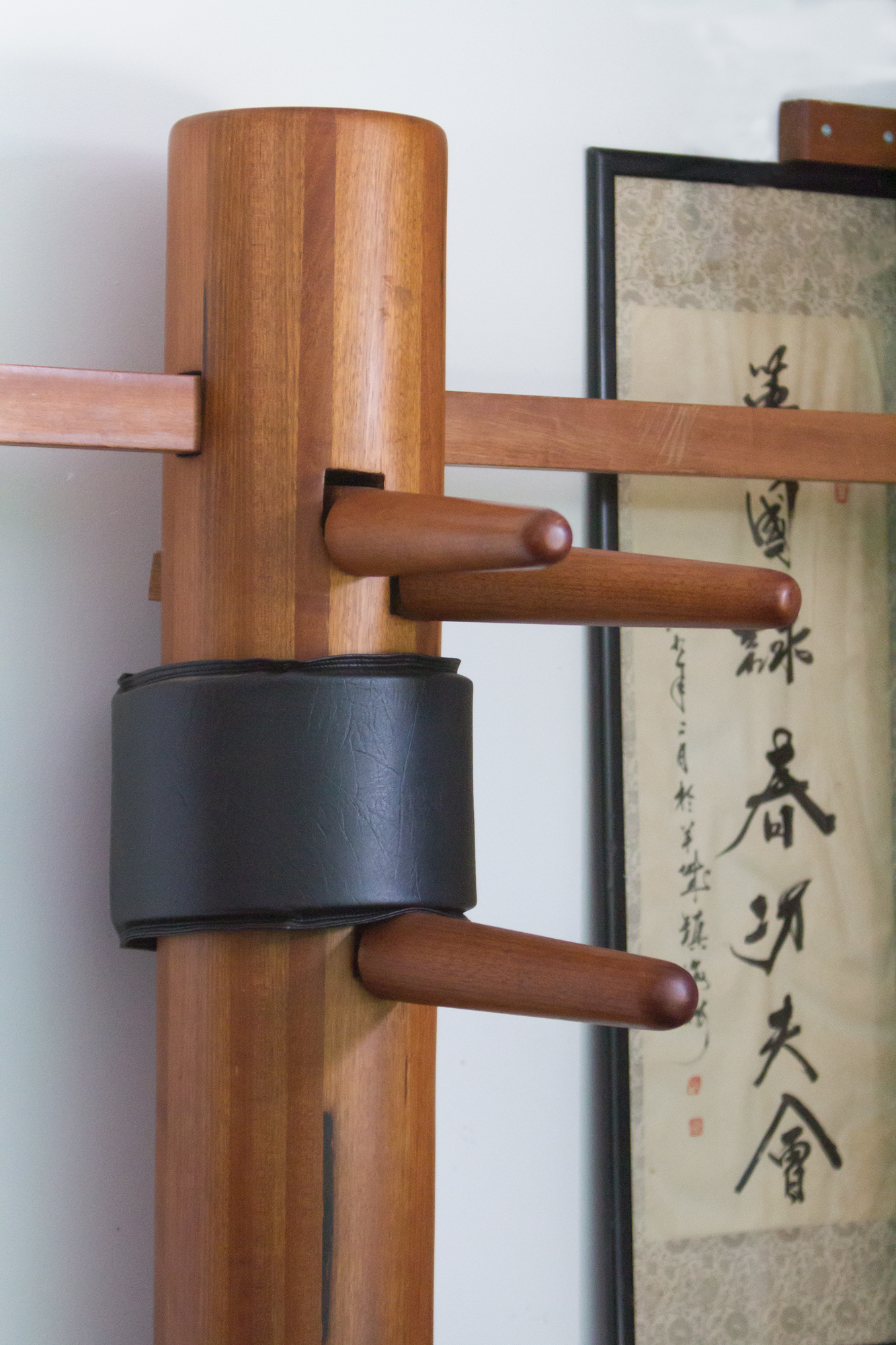 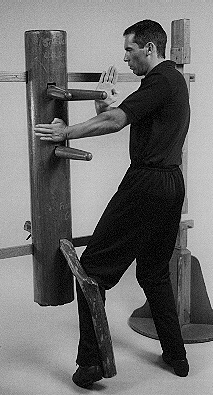 The Wing Chun Wooden Dummy training is approached with the intention of developing particular skills.   The skills are to further develop your ability in sticky hands and ultimately self -defence.

The Wooden Dummy, or Mook Yahn Jong, is designed to aid in teaching a practitioner the importance of achieving the strongest angle of approach to apply pressure.  Because the dummy is generally made of hardwood to add weight, it is also used to develop the correct use of strength and power when up close.

The Wooden Dummy height is always adjusted according to the practitioner, and should be set up with the higher arm at shoulder level.

The upper arms are adjustable, with the ability to change their height and angle away from the centre.  The wooden dummy arms do not bend and are only capable of being moved a small amount when pulled or slapped.

When setting up a personal dummy, it be adjusted in order that the top arms are nipple height.

If a dummy is set too high a practitioner will be unable to practice many of the techniques. Equally, a low dummy is not as beneficial although the difficulties of training are less.

The two upper arms do not strictly demonstrate the inside and outside gate as a beginner may expect. If you use your imagination you will see that the ‘inside’ areas, as you look at it, are often the outside areas of what would be the opposite arm.

A primary aim in Wing Chun fighting is to face an adversaries centre line without them facing yours.

The dummy is designed with arms angled away from the centre line, the practitioner, therefore, has to move well in order to achieve good angle and be able to work on the Wooden Dummy without losing their balance.

Taan Sau (palm up block), clearly shows how a practitioner should achieve a good angle of approach and press into the Wooden Dummy leg. In application, on an opponents’ cross, the rival is breaking the stance and offsetting the opportunity to unwind with a left hook. If he did unwind his hips would open and a groin kick become available.

The lower arm represents an arm or leg at the lower mid level. This is also the lowest area in which a Wing Chun student would use their own hand techniques. Beyond this point turning and the use of the legs are the defensive tools. 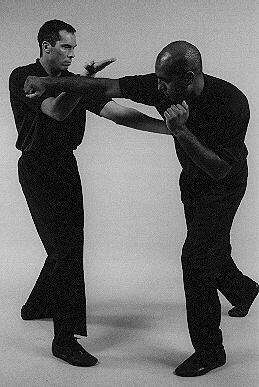 An individual’s height is largely made up by the length of their femur or thighbone. However, the height of the knee joint from one individual to another varies very little and ,therefore, the Wooden Dummy knee height must be set accordingly.

The Wooden Dummy leg represents an opponent’s stance.  Many students fail to set up their dummy correctly and leave the dummy leg off the floor. This allows a lazy or  student the ability to pass their foot under the leg and leads to sloppy footwork.

Wooden Dummy: Attack and Defend As One! 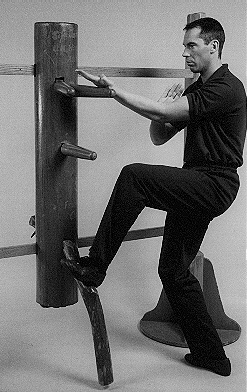 It is often shown in books on Wing Chun Kung Fu, that a practitioner is simultaneously striking with hand and foot whilst blocking.

This leads people to believe that this kind of co-ordination is typical of Wing Chun Kuen students, when in fact it is not.

Whenever a simultaneous leg and hand technique are shown on the dummy it is a leg technique with hand block.

The strike is incidental as the variables are too great to expect everything to work out in reality.

Most styles block then punch or block then kick, and will often intercept a strike by ‘beating a person to a punch’ etc.

Wing Chun Kuen practitioners can block and strike or block and kick simultaneously but not all three.

The hand technique shown on a Wooden Dummy when blocking and kicking is for distance judgement, as it very easy to be out of range when kicking low.

It is important to be able to drive through with a low kick to break a strong stance. One exception to this rule is the sweep kick. In this technique there a few important points to remember.

When training this technique on the Wooden Dummy, the most important starting point is the placement of the supporting foot. It should be in line with the dummy leg. If you step too far forward you could easily be hip thrown.

If you do not step far enough you will have no leverage and be easily counter swept.

In the UKWCKFA we teach these techniques religiously and have developed quick counter kicks if your foot placement is wrong.

The UKWCKFA third level syllabus is based largely on footwork and kicking ability and trains the student for realistic dynamic situations where an opponent can and will always be prepared to move.

Another common misconception shown in Wing Chun books and articles is that we use two arms to cover our whole torso when blocking with techniques like Kwun Sau and Gaan Sau.

No student, who trains in martial art for any length of time, is unable to tell whether a strike is going to be high or low once launched. Most students get struck because they are too slow or beaten by excellent timing, a double arm block would not help in that situation.

The Kwun Sau or rolling block is a very important technique in Wing Chun.  It is used, most commonly, to escape from the very threatening double inside gate position.

When ‘stuck’ on the inside gate the opponents’ ability to crush, close up, and strike freely is very high.  This positional disadvantage is realised early in Wing Chun, and is the reason why so much time is spent mastering smooth ‘changes’ in sticking hands.

Gaan Sau is a technique that allows a Wing Chun practitioner the opportunity to locate and control an opponent’s arms.

The Gaan Sau is also a great technique to absorb a strong mid to high round kick. Although it appears to be a very large technique on the dummy, it is NOT used to cover from lower mid level to high.

There are some clever techniques and very simple principles applied on the wooden dummy. To a Wing Chun Kuen student the idea is to stick well, ‘Chi Jong’, and maintain contact as necessary.

Not all applications require one to stick, some require that a break is made and re-enforce the principle of striking when the hand is freed.  Laat Sau Jik Chung

Wooden Dummy: Crossing Legs… Not So!

A Wing Chun student would never actually cross their legs at close range.  The danger of being pulled or pushed is far too high.

The idea used in the UKWCKFA is to learn to move very quickly to the outside of an opponent but remain very close. In self-defence it is an essential move when confronted by multiple assailants and under extreme pressure when cornered or against a wall.

The wooden dummy represents a classical method of training.  However, it is not the strict sequence of a form that realises mastery of the techniques, but the ability to move freely with all the elements learnt from the form. 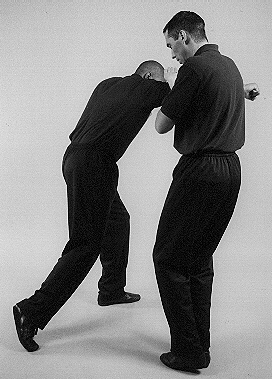 Along with the traditional 108 movements (plus 8 at the end of each section if you want to be pedantic) there is another form. This form is more practical in application and is a drill form.

The Drll Form is basically a form where the most important elements are repeated in a simple, less artistic sequence..

Ultimately the dummy is a tool and and to be respected as a good practitioner you would be expected to be able to move formlessly applying all the skill and knowledge applied through the syllabus taught.

Lastly, the Wing Chun Wooden Dummy form can be practiced in the air without using the dummy at all.  The sequence should be sharp and powerful, and an observer almost able to see the missing dummy! 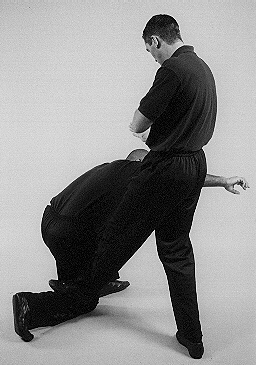 This aspect of the Art is known as Hong Jong or Empty Dummy.

Many UKWCKFA students know the wooden dummy but in over 35 years only 4 persons have had the courage to grade at this level.  All found the empty dummy form totally exhausting.  For those curious out there they are: