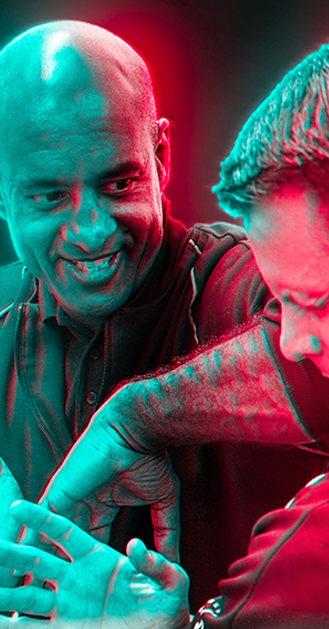 Sifu Mark has been training within the UK Wing Chun Kung Fu Assoc for over 30 years under the guidance of James Sinclair.   The beautiful studio that Sifu Mark Phillips teaches at is located in Wood Green, North London

Master Mark Phillips is quite simply the most talented student in the Association. He has been known for many years as ‘Mr T’ as every technique he uses is so well timed. His control at speed is remarkable which is just as well as he is 6’2″ and is very powerful. He has passed 5 gradings and is looking forward to his multiple fight challenge as part of his 6th level grading.

Master Mark Phillips is now teaching at his full time school in Wood Green. It is a great opportunity for people in North London to train regularly with an exceptional teacher.

Mark Phillips won the prestigious ‘Instructor of the Year’ for 2004 award.

Mark Phillips won the prestigious ‘Instructor of the Year’ for 2004 award.

Master Mark Phillips travelled to Hong Kong where he demonstrated his chi sau skills in front of many Masters at the 2nd Ving Tsun Atheletic Association World Conference. He has since been accepted as a lifetime member and recognised as a Sifu by the VTAA.

Master Mark Phillips travelled back to Hong Kong where he demonstrated and taught to a very impressed group of Wing Chun students.

Master Mark Phillips won the coveted ‘2006 Student of the Year’ award for the first time. His contribution to all the students within the UKWCKFA and to his own teacher is undeniable.

Master Mark Phillips was awarded his Blue Belt in Brazillian Jiu Jitsu. The start of yet more skills within the martial arts.

The London HQ moved to the new prestigious premises in Wood Green. The school is world class from the expert tuition to the decor and facilities.

Mark took his LWCA team to Hong Kong and China and demonstrated the Art in the homeland of Wing Chun.  He was extremely well received and made a huge positive impression.

Master Mark Phillips became a ‘Professor’ in Brazillian Jiu Jisu when he was awarded his Black Belt.

Master Mark Phillips completed his Psychology PhD and has the title Doctor Phillips.