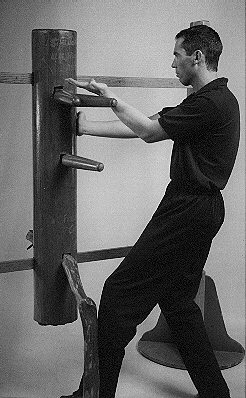 The Wing Chun Taan Sau is generally accepted as the most distinctive individual technique in Wing Chun Kuen.

There is a theory that states that a gentleman named Taan Sau Ng was the true founder of Wing Chun.

This story has some credence in that Taan Sau Ng reputedly worked on the Opera Troupe Boat and was well versed in Kung Fu.

Taan Sau is often translated in somewhat colloquial terms as ‘Palm Up’ block.

Taan translates as ,open up and spread’.

The UKWCKFA consider disperse a better term as it is used to disperse force in contact with your arm.

As the palm does indeed face ‘heaven’ it makes sense that the term Palm Up Block has been universally accepted.

The contact area on the Wing Chun Taan Sau is the back of the forearm and then there is a rotation to the radial side of the forearm.

This differs from the Bong Sau, Gaan Sau and Jum Sau which all use the ulna side of the forearm.

The Wing Chun Taan Sau is most frequently used in Chi Sau.   Here it is an effective cover.

Taan Sau in Chi Sau is used to used to dispose energy by rotation and when combined with good footwork is able to offset forward momentum by applying pressure across an opponents’ stance.

The Wing Chun Taan Sau is often demonstrated with a low palm strike.  Realistically this is not an effective strike as most people simply do not train hard enough to apply the power required to hurt their opponent.  Also, in he Northern hemisphere the weather is cold and people do not routinely wear light clothing.

Even a light jacket would absorb a lot of the force of a body strike!

However, the low strike when used as a source for distance judgement has value.

On the wooden dummy the Taan Sau is applied to the outside of the upper arms as you look at it.

Because the dummy arms are angled away from the trunk, if you do not successfully get the correct angle of application you will be ‘pushed’ away by the dummy.

The strike placed with the taan sau is not as significant as the positioning on the dummy. After all, in a test of hardness the dummy wins every time!!

Taan Sau can be applied to both gates .   The inside gate is considered the more dangerous due to the danger of the opponents other arm.

However, in reality IF you can manage a highly coordinated simultaneous block and counter, there is no danger.

Taan Sau to the inside gate will not remain close to the centre line. A punch with even a slight hook could immediately penetrate your defences.

This gives rise to the idea of Taan Sau being a dispersal hand.

The Taan Sau outside gate is best applied against straight punches.

It is often applied from a very low hand position and facilitated with a small Pak Sau to establish control of the Centre Line and opponents elbow.

Taan Sau can also be performed using the ulna side of the forearm.

This variation would rise to block rather than move forward. The technique is ideal for the application on Huen or Kau Kau (circling), but must not be confused with the Jum or Chaam Sau.

Taan Sau is a useful technique particularly reinforcing the principles of interception when used during common gate changes from outside to inside.

Moving from inside to outside is possible, however, it requires a very straight punch cutting across your own centre.

Within chi sau training the change from inside to outside is the most common attempted, and allows a practitioner to pressure their opponent and gain that necessary advantage, whilst moving away and covering the danger from the opponents other arm…