Are Wing Chun Elbow strikes really the fight finishers that most people think?

Here James Sinclair discusses some fundamentals to help in your training.

The use of the elbow skills lies in very simplistic but, none the less, profound theories.  Once the hand is grabbed or passed, the use of the elbow becomes the next line of defence.  There is a poetic statement that goes along the lines of:

‘If the head of the dragon is grabbed,

the tail will whip,

If the tail of the   dragon is grabbed

the head will bite’.

Elbow techniques are found in the Cham Kiu and Biu Tze forms of Wing Chun Kuen.  It should be obvious that they are a useful close range tool, and that it is the hardness of the bone that causes damage to the opponent.

Please be aware that when we mention the elbow, we are not always discussing the elbow strike, but also ability to recover defensively when the hand is passed.  Bong Sau is the most obvious example of this recovery, but Moot Sau and Jut also rely on this theory.

In the UKWCKFA we do not encourage the use of striking with the tip of the elbow.  This region of the humerus, is not ‘humorous’ if used. The olecranon process is too easy to ‘chip’ and too close to the nerve route.  However, there are always exceptions, such as very short prods, butts and strikes to muscles where the risk of self injury is reduced.  For real power strikes and escapes from grasps the focus should be on the use of the upper forearm.

Elbow techniques encompass strikes to many parts of the body.  It is commonplace to strike to the biceps, triceps, pectorals and recognised acupuncture points of the wrist hand and forearm.

One common problem often  demonstrated by Wing Chun Kuen teachers is the use of elbow range strikes after punches.  This can look very fancy and aggressive. However, if one has struck with the fist, or more importantly missed with the fist, it is unlikely the distance will be correct for the effective use of elbow strikes.

Elbow strikes can certainly be applied from longer range provided that your intent is well timed and you have the footwork and courage to move across the distance required.

From observation and experience elbow strikes definitely have the capacity to finish fights, but usually as a result of damage to bone or cuts and not as commonly through knockout.  If you witness MMA you will see fighters take many heavy elbows on the ground, but punches more often cause knockouts.

Please refer to newsletter issue no.3 for details on a fight finished with an elbow strike. 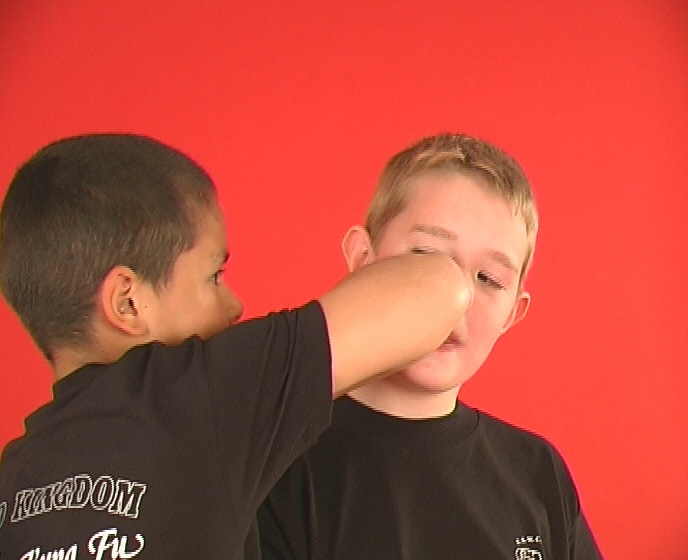 Wing Chun Kuen is a very effective self defence.  However, it has evolved along a path that leads one to believe that it is purely for fighting when, in fact, it is a beautiful art too.

What strikes most observers of this art is just how little one can glean from observation.  Demonstrations tend to be fanciful affairs, with highly choreographed sequences designed for pure entertainment rather than giving the public any real idea about how the art is applied.

It is said that Wing Chun Kuen has some of its history in the Red Junk Opera Troupe and this could explain why the forms of the art are so very cleverly choreographed, and disguise the intent of the practitioner from unwelcome eyes.

Unlike many other approaches, it is almost impossible to work out the skill and application of Wing Chun Kuen from simply observing the empty hand forms.  This is a possible reason why there is such an abundance of differing interpretations within Wing Chun Kuen circles.  Although fundamentally the same, many practitioners continue to argue that their own own approach is more authentic, traditional or effective than others, it remains a simple ploy to try and corner the market.

Whilst the UKWCKFA have no problem with a person stating they are the best, it is difficult to justify that this should or could possibly  equal that other practitioners are poorly trained, skilled or qualified to make their own stand in the art.

Wing Chun Kuen was a secretive art, selectively passed down through the generations. Whilst it is not possible that all the previous practitioners were incredibly dedicated, hard working, and had huge talent, it does appear that the selective/vetting approach to teaching did result in sufficient skilful practitioners being produced, allowing the art to be refined from generation to generation.