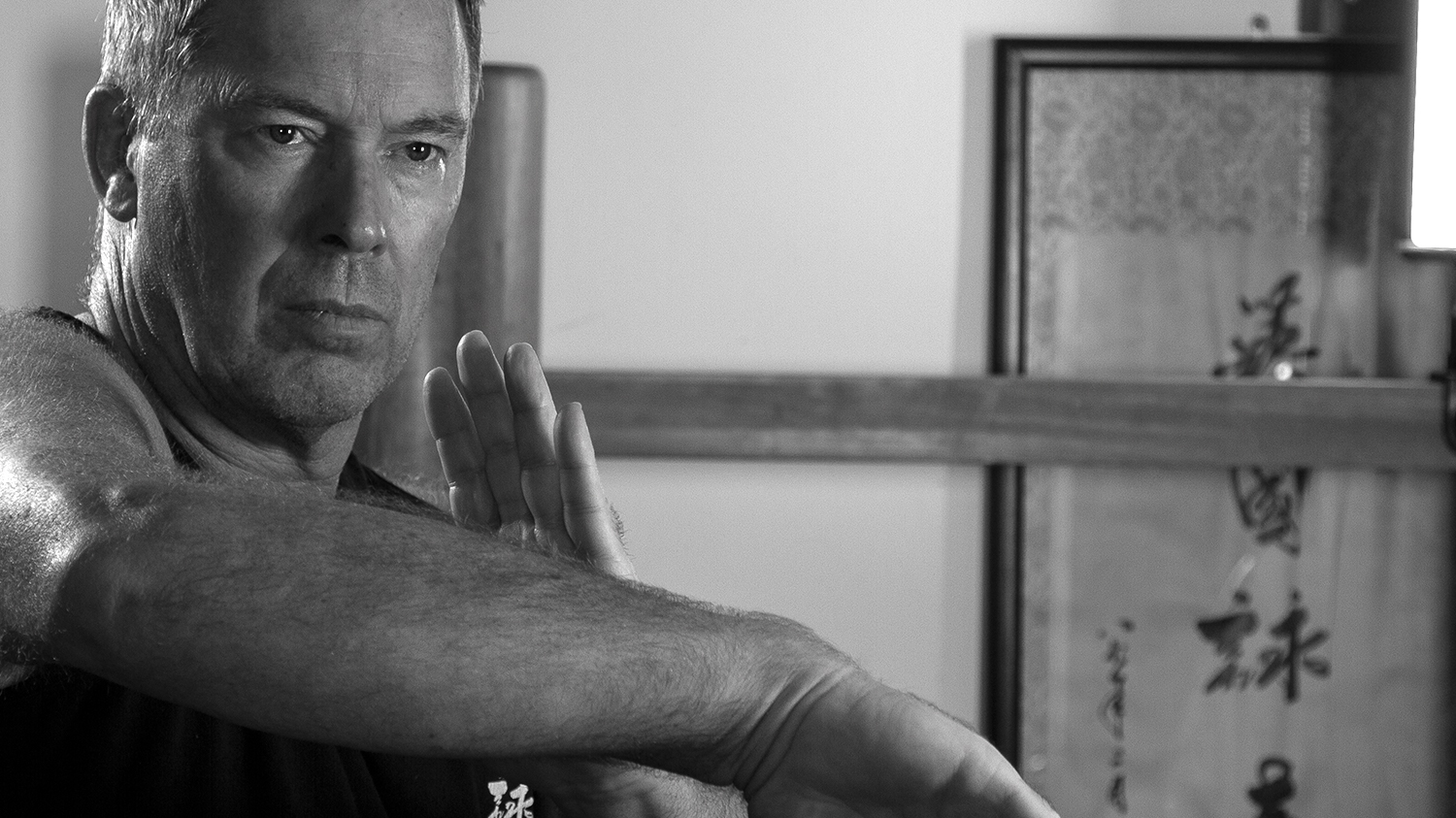 Over the years we have experimented with teaching various techniques to beginners in an attempt to introduce the system as successfully as possible.

A Wing Chun teachers responsibility is to spread the art to as many people as possible.

The Wing Chun Bong Sau is commonly referred as Wing Arm but the Chinese characters refer to using the shoulder to form the frame.

The Cantonese word ‘Bong’ in this tone and context means to  Bind or `Wrap.

There are many explanations as to why it is commonly called Wing Arm.

The colloquial Wing Arm name is purported to refer to the Crane (bird) using its wing to protect the breast from being attacked by the snake. This is why the Wing Chun Bong Sau is used to protect the body and is not the the most effective cover for the  head.

It is a simple fact that with a little movement the head can be brought out of danger, but the trunk will usually remain vulnerable, even turning would require some added safety to ensure protection.

The Wing Chun Bong Sau demonstrates many of the principles that build this system. Bong is used to protect an area effectively.

The elbow is higher than the hand and offers good coverage.

The Wing Chun Bong Sau will collapse safely under pressure whilst preventing the arm from getting trapped. Thus binding and controlling the opponent. ie tying them up.

Bong can transform to Taan Sau (Palm Up) and vice versa with ease.

This has led to a saying that

“If the Dragons Tail Is grabbed, The Head Will Bite

If the Dragons Head Is Held The Tail Will Whip.”

Bong Sau can be used at Low, Mid and Upper Levels.

Beginners use Bong Sau frequently and often accidentally win a fight by using Bong Sau to over when a person rushes forward and it inadvertently becomes Jarn (elbow) strike.

Bong Sau is used to help a student understand the centre-line.

Bong Sau reinforces an understanding of the gates and body proportion.

Some teachers have stated that Taan Sau is definitive of Wing Chun and whilst this may be true as an identifier, it is not as easily applied, as a defensive technique, as the  Wing Chun Bong Sau.

How to Use The Wing Chun Bong Sau:

Place the knobbly bit on the little finger side of the wrist (styloid process of the ulna!!!) in the centre line.

Ensure the elbow is higher than the hand

The upper arm (humerus) is in a straight line pointing to the front.

If the above is adhered to, your Bong Sau will be correct for your frame.

When you turn allow the frame to move with you.  This creates a counter attack space.

The blocking area for Bong Sau is the region of the ulna just above that knobbly bit again. The reason for blocking in this region is that it will be almost impossible to resist strong pressure, thus Bong say is intended to absorb a certain amount of pressure but is certainly not immovable.

One of the most utilised techniques used in conjunction with Bong Sau is the Laap Sau (deflecting hand).   This is used to ensure the line to counter attack remains open.  It is also used if there is a lot of pressure coming forward onto your arm.

A common counter attack is the Laap Sau (deflecting hand) and Shat Geng Sau (chop to the throat).  However, there are may techniques that can be applied with the Laap Sau.  Indeed it is important to remember that there is no usually a need to use Laap Sau and correct placement and delivery of Bong Sau will in itself create an opening line and something as simple as Biu Tze can be used to devastating effect.

Another reason for using this region is that it is close to the hand and co-ordination is far better near the hand rather than elbow. By not actually trying to block with the hand itself a greater area of your body is covered and the desire to hold unnecessarily is limited.

Is Bong Sau A Block or Cover? 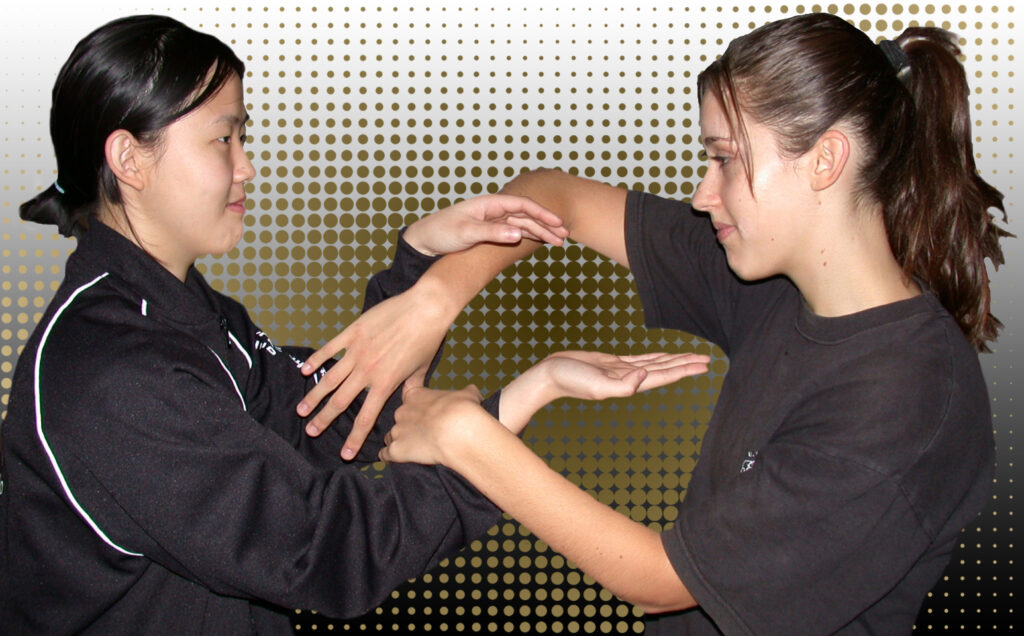 There are many ways to use the the Wing Chun Bong Sau, and they primarily rely simply on the circumstance.

When dealing with punches/hand strikes that are coming from a loss of contact the Wing Chun Bong Sau should primarily be seen as a method of covering the body and potentially locating the opponent’s arm and re-establishing contact.

The Wing Chun Bong Sau should not be seen as a ‘block’ whereby a clash is intended where you purposefully throw your arm at a strike that was so clearly anticipated that you could have intercepted with a simple strike.

One of the major mistakes made in applying Bong Sau is when a practitioner lifts the frame directly up to meet an incoming punch. The shape and direction of this movement are perfect for an opponent to set up a low punch counter.

In the Wing Chun Art most practitioners are not in fact ‘blocking’ strikes with Bong Sau, they are usually nullifying the potential of their opponent to attack by using the frame to effectively ‘stick’.

The frame of Bong Sau is the only way you will be able to consistently protect your throat from attack in Chi Sau training.

The Wing Chun Bong Chor Sau literally means ‘Wrong’ Bong and refers to the obvious danger from your opponents other arm.  The opponent has easy access to your lower body and to pin and control your elbow.

The Bong Chor Sau is fundamentally more risky because the practitioners technique tends to fold onto themselves rather than diverting the opponents punch away.  With a regular Bong Sau you can easily turn to avoid pressure, this is not the case in Bong Chor Sau as it would effectively result in you giving your back!   To save yourself the UKWCKFA advocate walking into the movement, this is a brave but sensible option. 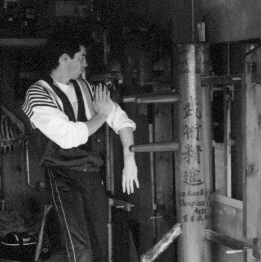 Low Bong Sau is applied in a completely different manner.

The Low Bong Sau technique is swept across the body. It can not ‘dive’ down, as the danger to the fingers would be too great. The frame would also tend to straighten and make it less useful.

The shape is very similar in that there is an angle in the slope of the forearm. However, we do not use the ulnar as the blocking area but rather the whole of the top the forearm near the wrist.  if the rotation of the lower Bon Sau were similar to the upper level the practitioner would be susceptible to an easy dislocation of their shoulder.

Bong Sau is usually applied off the rear leg in a forward stance and the weighted leg in a side stance (Jun Ma).

Bong Sau is taught from the front leg in the UKWCKFA advanced classes and adjustments are made to improve the power and balance. This is typical of most advanced training.

The Wing Chun Art is well respected for the adapatablilty and approach that the technique are taught and trained.   Once there is good understanding and ‘feel’ for the move, the rules can be bent. A student with experience is more flexible and adaptable in changing circumstances and, therefore, responds naturally even if they make a mistake. 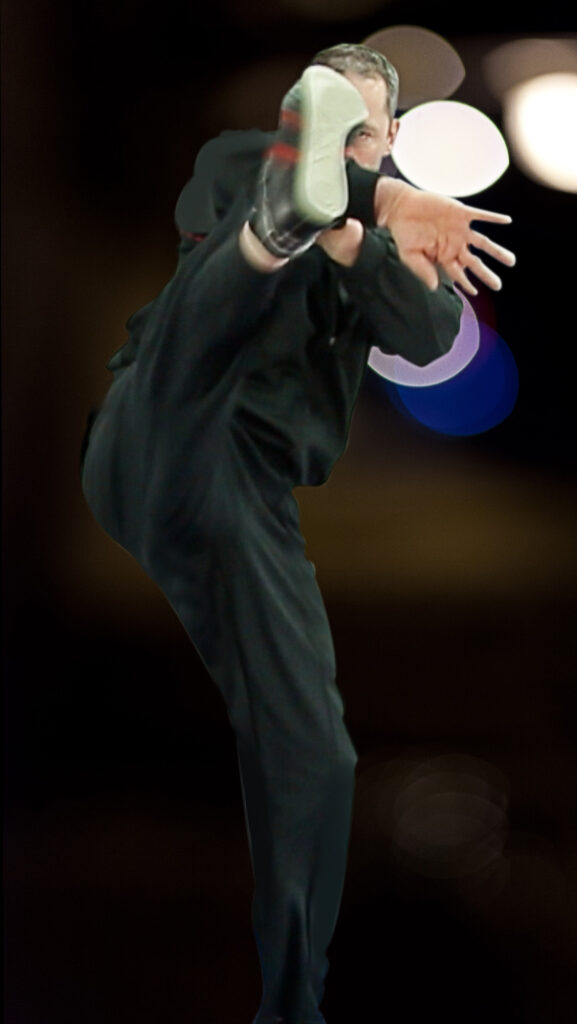